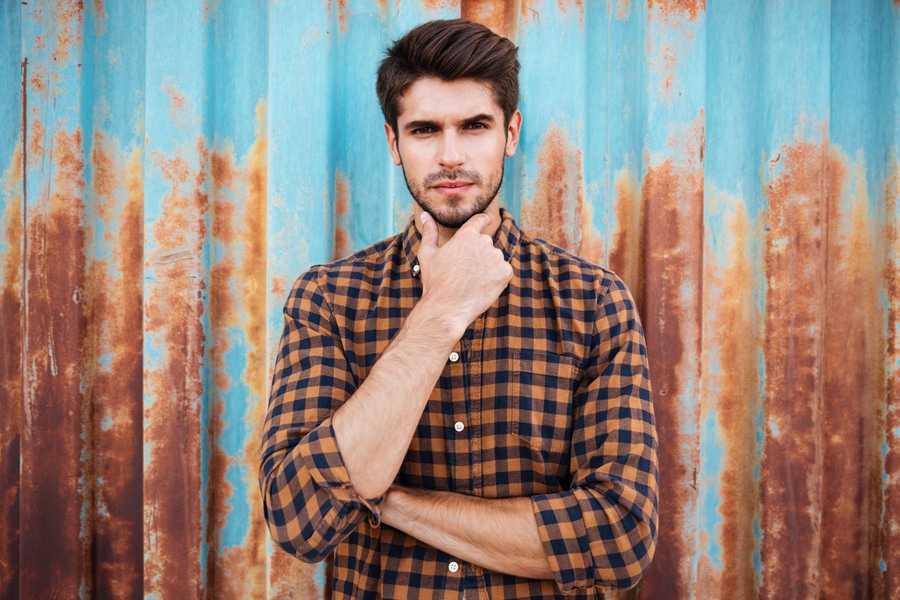 If you’ve been spending any time in orthotropics circles, you might have heard the term “hard mewing”, but what exactly does that mean, and should you be doing it?

Hard mewing is the practice of forcefully pushing the tongue against the palate during mewing. While some believe hard mewing can lead to faster results, the evidence is definitely lacking.

By now, you probably know mewing as the practice of holding your tongue up against the palate, also known as the roof of the mouth. Since the tongue is a surprisingly strong muscle, you might have noticed that you can apply varying amounts of pressure with your tongue.

In fact, it’s the amount of pressure that you apply with your tongue which distinguishes hard mewing from regular mewing, also called soft mewing.

In regular mewing, you simply hold your tongue up against the palate, using a light, comfortable force. The pressure you apply with your tongue during regular mewing should be just enough to create a vacuum sensation between your tongue and palate; Dr. Mike Mew calls this the “suction hold.”

If you try this out for yourself right now, you’ll find that you don’t really need much force at all to create this vacuum between your tongue and palate.

In hard mewing, however, you actively push your tongue against the palate as hard as you can. Since you’re applying so much pressure, you may not feel the vacuum sensation as much as in regular mewing. Instead, your entire tongue might come into contact with the palate, not leaving any space for the vacuum to form.

Regardless of whether you feel the vacuum or not, the premise of hard mewing is the same: to apply large amounts of force to the palate, using the tongue, instead of just holding the tongue up against the palate.

The Case for Hard Mewing

So what exactly is the point of hard mewing? Well, many people have looked to proper oral posture, or mewing, as a technique to improve their facial aesthetics. A good number of these people are already adults, for whom mewing is definitely less effective on a cosmetic level.

Hard mewing is the proclaimed solution to this. By applying larger amounts of pressure to the palate, some believe that you can change your facial structures faster, thus speeding up your mewing transformation.

On forums like Reddit’s /r/Orthotropics and The Great Work, a number of users have claimed to have had great success with hard mewing. One user even compared hard mewing to the AGGA (Anterior Growth Guidance Appliance) appliance, which is used by dental professionals to expand the palate. They wrote that “the palate and maxilla don’t care what is pushing, as long as a force is being applied.”

After all, the concept of hard mewing makes sense: applying more pressure to the palate should cause more pressure to be exerted on your skull, which should (in theory) speed up facial changes associated with that pressure.

We’ll discuss the accuracy of these claims in a second, but first let’s discuss the potential drawbacks of hard mewing.

On the other hand, there are the drawbacks of hard mewing. As it turns out, there are indeed a few.

Most notably, you might feel pain or discomfort while practicing hard mewing. Many individuals find that the large amounts of pressure needed for hard mewing cause throbbing headaches and jaw pain.

In addition to the possibility of pain, hard mewing can actually be quite tiring for the tongue. If you try it for yourself, you’ll find that your tongue (and other facial muscles) quickly feel strained. Although it’s not exactly painful, you’ll find it hard to mew for longer periods of time if it strains you.

Of course, if you find hard mewing painful, you should definitely stop.

Whether hard mewing actually has any detrimental effects to your health or appearance in the long term is unknown, and it doesn’t look like we’ll be getting statistically significant answers any time soon, due to the lack of present-day studies on mewing. Personally, I can’t see any reason why hard mewing would cause negative side effects (within reason).

Should You Do Hard Mewing?

At this point, what you’re really wondering is whether you should try hard mewing for yourself. The reason you’d probably want to do so it is to speed up facial changes from mewing, but does hard mewing really work?

Unfortunately, there’s no evidence that hard mewing will speed up facial changes or provide other benefits. That, together with any potential side effects, probably means that you shouldn’t bother with hard mewing.

In fact, Dr. Mike Mew has allegedly been quoted in saying that mewing is “more about continuous posture than forcing your tongue to the roof,” in response to a question on the effectiveness of hard mewing.

More recently, in the Orthotropics video How to Improve Cheek Bones, Dr. Mew explicitly stated that “time is more important than force” when it comes to mewing. He doesn’t comment on whether adding extra force will be more or less effective; he simply says that time is more important. This also leads me to believe hard mewing isn’t worth it.

Hard mewing is as simple as forcefully pushing your tongue up against the palate, while you maintain proper oral posture. Despite allegedly speeding up the normal mewing process — in terms of facial changes — the evidence for hard mewing really isn’t there, beyond a few, anonymous internet testimonials.

Even Dr. Mew himself says that mewing is more about holding the tongue posture continuously, so I suggest you don’t bother with hard mewing. Instead, I’d recommend that you aim to mew for longer periods of time, until you can do it subconsciously.