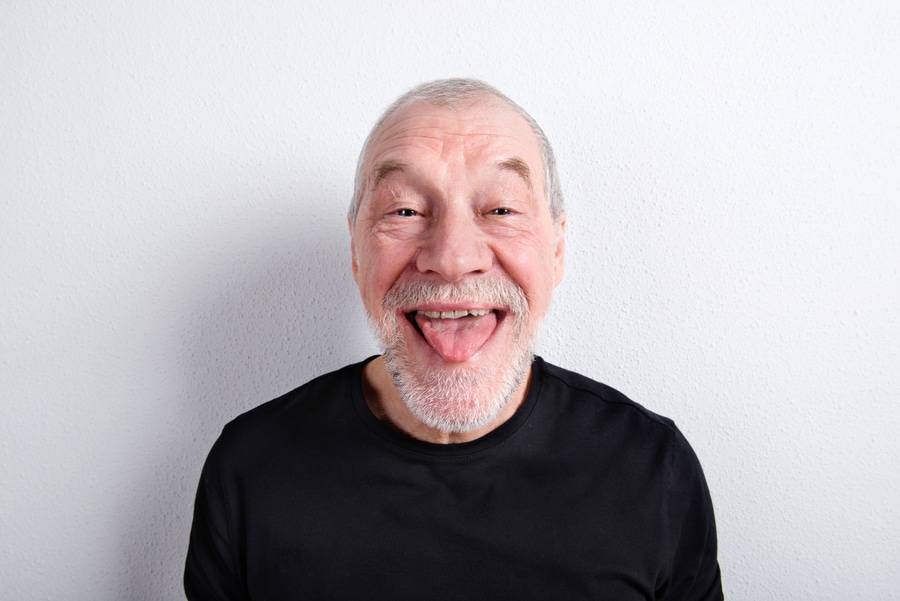 Mewing is the latest self-improvement craze. In this article, I’ll walk you through everything there is to know about mewing, including what it is, what benefits it has, and whether or not it works.

Mewing, also known as proper tongue posture, is an oral posture technique invented by the British orthodontist Dr. Mike Mew. Simply put, mewing is training your mind to rest your tongue against the roof of your mouth. By doing so, it’s believed that you can create a more attractive facial appearance. Aside from chewing gum and facial exercisers, there aren’t many ways to change your facial appearance. That’s why mewing is so popular.

To produce lasting results, the mewing tongue position has to be held for as much of the day as possible. After time, the tongue muscles strengthen and maintain the correct position on their own, around the clock.

According to Dr. Mike Mew, the mewing tongue position is the correct resting position for the tongue. Instead, though, many individuals allow their tongue to sit loose on the bottom of the mouth — the result of eating so many soft, industrial foods — which he believes is a major cause for poor facial development, including crooked teeth.

Mewing is said to have both cosmetic and health benefits. In other words, not only can mewing make you more attractive — it can also improve your quality of life.

Let’s talk about these benefits one by one.

If you look at my compilation of mewing before and after photos, you’ll see that this simply makes the face look better. It’s hard to explain why, but it gives the face a “fuller” look.

Mewing can also improve your jawline and cheekbone appearance in several different ways. First of all, mewing pushes the maxilla forward, pulling the cheekbones with it. This makes them more visible.

Secondly, mewing encourages you to swallow correctly, which allows the buccinator muscle (used by infants for sucking) around the cheeks to break down. This creates a more defined facial appearance by revealing the cheek and jaw bones.

3. Support for the Eyes

It’s also said that by pushing the maxilla up, you give your eyes a better platform on which to rest. This might result in a less baggy or sullen look around the eyes, since the tissue below the eyes doesn’t sag as much.

4. Expansion of the Palate

The most obvious benefit of all: mewing makes your palate (the roof of your mouth) wider. While this isn’t an immediately noticeable benefit, it’s believed that a wider palate reduces the likelihood of developing crooked teeth, since there’s more space for the teeth to fill.

With proper tongue posture, you use your tongue to swallow instead of relying on your face muscles. This allows for complete swallowing as opposed to partial swallowing, thereby reducing acid reflux.

A side benefit of improved swallowing technique is that your face may look leaner. This is because the facial muscles used for swallowing (like the buccinator muscle) won’t develop as much, helping to reveal the cheek and jaw bones.

Since proper tongue posture requires you to close your mouth, mewing will force you to breathe through your nose. The benefits of breathing through your nose are plentiful: less nasal congestion, reduced sleep apnea, and improved energy.

Reduced snoring is another possible benefit of mewing. This is likely the result of improved breathing habits (read: breathing through your nose), but I thought it was worth mentioning separately.

Posture actually has a lot to do with your overall health. In fact, your body’s orientation is closely related to the processes of your body. It also has many psychosomatic benefits. So, as you might expect, an improved oral posture will just make you feel better, which is a health benefit in and of itself.

I’ve also heard claims that mewing can fix an overbite. However, there’s very limited evidence for that claim and little reason to think it would. I discuss this topic in-depth in this article.

Other purported benefits which I’ve found little evidence for include:

Dozens of before and after pictures suggest that mewing really works. Unfortunately, there are few clinical studies which directly support the practice. I did find one study which suggests that mewing can improve facial appearance, swallowing, and overbite.

Unfortunately, clinical evidence is hard to come by when it comes to mewing, because it’s been so poorly studied. Although there have been some discussions on tongue posture and how it relates to the development of the face, these have been limited in scope. There is, however, one particularly relevant study, which originates from South Korea.

A 10-year study published in the Korean Journal of Orthodontics is one of the most direct confirmations that mewing does, in fact, work.

The study focused on a single patient who had an anterior open bite — where the back teeth touch but the front don’t — low tongue posture, and tongue-tie. The patient, 19 years old, had previously attempted using retainers prescribed by his orthodontist for two years, but to no avail.

For the purposes of the study, the patient was given a tongue elevator: a painless device which would train his mind to keep his tongue at the roof of his mouth. The tongue elevator was minimally invasive and caused no discomfort, was relatively cheap, and easy to apply.

The results were quite extraordinary. Not only did the patient soon correct his overbite and swallowing, but his appearance also improved. Best of all, the results showed “long-term stability and were maintained for six years through continual use of the tongue elevator.”

Although the study used a tongue elevator, it still confirmed the relationship between tongue posture and facial appearance. By lifting the tongue towards the roof of the mouth, one can bring forward their facial profile.

Studies on the Effects of Proper Tongue Posture

Because so few studies directly mention the effects of mewing, we decided it would be best to instead explore the relationship between tongue posture and the palate and/or jaw.

One such study published at Aga Khan University Hospital found that tongue-to-palate distances were significantly affected by tongue positioning. The study concluded “tongue posture has a significant effect on sagittal jaw relationship and dental arch widths.”

Many other studies have confirmed that tongue posture has a direct relationship with the morphology of the jaw and lower face. For example, in a study published in the European Journal of Orthodontics, the same conclusion was reached: those with smaller palates also had a lower tongue posture. The results were statistically found to be significant.

However, the direct links between tongue posture and proper health are still poorly understood. In a literature review on the topic conducted in 2016 published in the Journal of Oral and Maxillofacial Research, the findings were inconclusive. The recommendation was to conduct more imaging over a period of time to draw a more direct relationship.

Studies of Tongue Posture in Children

Dr. Mike Mew always mentions how the earlier you develop proper tongue posture, the better. This is because the younger you are, the easier it is to change and contour your face shape. As a result, the effects of mewing are most noticeable in children.

And there’s been studies to back this up. For example, one 2018 study published in Radiology and Oncology found that tongue positioning in preschool children was closely related to anterior open bite and articulation disorders. By correcting the tongue posture to naturally lie on the roof of the mouth, the mouth is best positioned for articulation development.

Continue Reading
link to Mewing Side Effects: Can It Ruin Your Face?

Mewing is a popular facial improvement technique that involves holding the tongue against the roof of the mouth. Orthotropic practitioners like Dr. Mike Mew claim the simple oral posture technique...